The End of XP

Internet users will need to spend £0, £80 or £100 minimum after 8 April when Microsoft withdraws support for Windows XP.

Although there are many choices, the basic one is whether to upgrade an existing PC with a new operating system like GNU/Linux or Windows 7/8, or whether to buy a new machine altogether, with additional choices of Android, Chrome and Mac OSX as distinct possibilities. 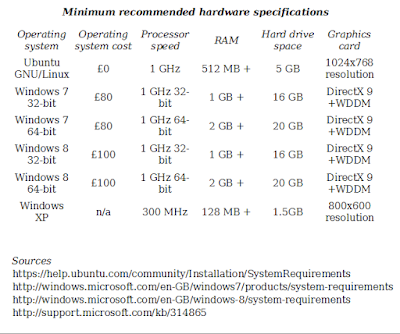 If you read the April 2014 Which? magazine test results on current desktop PCs, you will find that Apple's iMac scores the highest in tests, with the Mac Mini in second place. In the laptop stakes, four different models of MacBook lead the field.

Often though, it comes down to budget and protecting ones investment. Many people still using Windows XP will have upgraded their screen to an LCD model at least, so why not find a way to keep using existing screen, mouse and keyboard? The good news is that many older PCs can be upgraded at zero software cost, by choosing a modern operating system like GNU/Linux. Ubuntu is one of the most popular current distributions, and for £0 plus a little quality time with your PC, it can be upgraded. Which?'s second favourite, the Mac Mini, also supports the use of standard screens, keyboards and mice. (Actually, that's why it is my personal favourite Mac, as I like a matt screen which the iMac and MacBooks do not have).

New PCs generally come with the new operating system installed, so that is a least hassle, but highest cost, upgrade route. New operating system licences for Windows 7 or 8 will cost around £80 or £100 respectively, and as many older PCs will not be of sufficient specification to run them, the GNU/Linux option begins to look very attractive.

Upgrade is imperative for users who want to keep using the 'net after 8 April, as, although Windows XP will not suddenly stop working, there will be no more vital security fixes periodically released by Microsoft. Historically, of all the operating systems, Windows is absolutely the one that needs continual upgrade as protection against the exploits of malicious hackers. As it now has in-built protection, finally catching up with GNU/Linux, Mac OSX, Android and all the other Unix-like systems, Windows 8 promises to be better, but oh dear, that interface.