The 2016 winter solstice is on Wednesday 21 December 2016 at 10:44 GMT. It's the main natural division of time, notable and heralding a new solar year. The festive season following gets its notable dates from different calendars historically in use, but the intent to follow the solar cycle was always there. 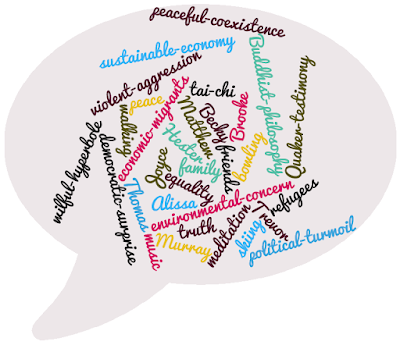 As December began, in mind was the usual jumble of thoughts about people, situations and conflicts. Unable as we were to marshall the jumble into coherent text ready for inclusion into our seasonal messages, the jumble became a word-cloud. We list bowling, walking. skiing, tai-chi, music & meditation as our activities, but that's not all that occupies us.

2016 has been a tumultuous year for the world. The violent aggression we've seen is the antithesis of the peaceful coexistence which most people desire. As refugees from violence and political turmoil join with economic migrants in their search for peace and a sustainable economy in which to make a living, our environmental concerns take a back seat.

Quaker testimony and Buddhist philosophy continue to teach us much. Children are not responsible for the sins of their parents. Why teach them to hate? And should not children have truth and equality as a birthright?

The sheer quantity of wilful hyperbole in the UK's EU referendum campaign and the USA presidential election preceded democratic surprise in both countries which are now implementing the results.

We are glad that most of our immediate family (Alissa, Becky, Brooke, Hester, Joyce, Murray, Thomas & Trevor} are all now settled around Campbeltown, Scotland. We will miss the company of Janet and Matthew this year.

We fervently hope for, and wish for you, a peaceful and fulfilling 2017.