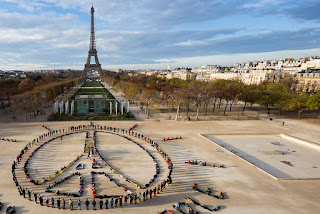 Right now - it's being reported that President Donald Trump is deciding whether or not to pull the United States out of the Paris climate deal [1]. (This message was just received from Aakash and India of Greenpeace UK).

The United States withdrawal from agreement will put back progress on tackling climate change and put vulnerable people and communities, who are already dealing with the effects of climate change, in even more danger [2].

200 countries, through sweat and tears, agreed they’d tackle the biggest challenge of our generation - and now this out of touch billionaire wants to chuck all of that in the bin.

But there’s still time to stop President Trump from doing harm to our planet. Both the Prime Minister and President have talked about their “special relationship” - going as far as holding hands. So if there’s one person President Donald Trump will listen to, it’s our Prime Minister [3].

Since the general election has been called, Theresa May keeps talking about her ability to provide strong and stable leadership - it’s now time for her to prove it and lead the way in protecting the Paris climate deal.

Will you ask Theresa May to put her foot down with Donald Trump? If thousands ask the Prime Minister to stand up to President Donald Trump, we can get this campaign in the newspapers and start a national conversation about this issue, so that there’s no way she can avoid it - whether she’s at public press conferences or on the campaign trail.

Just days ago, President Trump attacked the Paris climate deal as being bad for US interests and said: “countries like China, Russia and India will contribute nothing”[4].

This couldn’t be further from the truth. China already boasts the world’s biggest installed capacity of wind and solar power [5]. And the climate deal mandates India to make a major shift from fossil fuels to renewables to meet its energy needs [6].

Not only is President Donald Trump wrong about other countries commitments, he could stop more countries from signing the Paris deal altogether. Russia is yet to sign - and the US pulling out could make it acceptable for them to walk away.

That’s why our Prime Minister needs to stop President Trump unravelling this deal before it’s too late.

If we act today, we can make sure we can tell children in the future that we did something, that we stood up for the planet and all of the people and creatures on it.

PS: Today Greenpeace has joined a host of organisations including the RSPB, Christian Aid, CAFOD, ActionAid and Oxfam, calling on Prime Minister May to pick up the phone to President Trump and save the Paris climate deal.