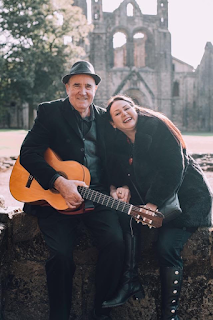 Congratulations to Steve Skinner and Sandra Twitchett, who are tying the knot on New Year's Eve. As duo Skinner & T'witch, their songs are often played on Folk At Five. Steve has written The Wedding Song for T'witch to celebrate their marriage, and their wedding day will see the song will be played four times in different arrangements. Sue Pope and Barry Pope from A Merrie Noyse Minstrel's are playing recorders, crumhorn, and rauchpfeife on the recording, which will feature, several times no doubt, on Folk At Five on Argyll FM and after the live shows on Mixcloud.com/trevox.
at November 08, 2018