Alex Meredith, and his mandolins 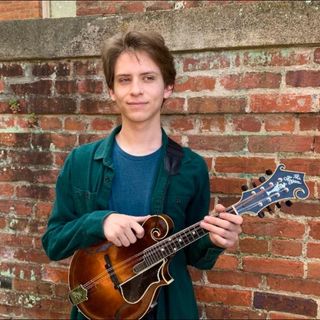 Born in the UK two days before the end of the last century, Alex moved to the US when he was 4. Immersed in traditional music pretty much all through his childhood, he tried various instruments but it wasn't until he picked up the mandolin at age 14 that he found his soul instrument and didn't look back. He has played in a couple of bands, including the Carolina Bluegrass Band at UNC Chapel Hill, the university he graduated from this summer with a maths degree. He frequently wins first place in competitions at festivals and was presented with the Director's award in the CBB; he has also taught mandolin to young students through a non-profit organization called the Junior Appalachian Musicians program, which teaches traditional music to young people at little or no cost and provides instruments for them to practice on. Alex loves jamming with fellow musicians and he enjoys composing tunes so he is already working on his second album.

Alex plays a Hogan mandolin, #18 of about 20 in the world. They are made by Adrian Minarovic, a maths professor from Slovakia. He also has a deep-toned octave mandolin.

The woods used are all local European, harvested and dried (except for some ebony); maple back, sides and neck; spruce top (some would call it "carpathian" in the US); walnut for inside blocks; lime (basswood) for linings and pear for headstock overlay. All pearl inlay is handcut. The body binding ledges were cut by hand like almost all work on the mandolins except truss rod channel that was routed and tuner holes drilled with drillpress.

Adrian Minarovic says of his mandolins: "They were made to Loar specs as close as practicable (body shapes, arching tone bars, all HHG construction, hand rubbed stain with oil varnish with french polish topcoat, IBW celluloid binding with miters/joints in "correct" style, tapered dovetail neck joint with neck offset in the original style, standard truss-rod. I use metric threads, the original size is obsolete even in US, edge protectors (bone instead of ebony ...) are dovetailed from one side into installed bindings like on Loars, pearwood headstock overlay black painted, one nut - I vastly prefer good bone over pearl etc."

They are beautiful mandolins and sound as good as much more expensive ones. Trouble is, it's hard to get one as he has a full-time job and makes so few of them. Alex bought his from the mandolinist with the Henhouse Prowlers, Jake Howard. They are now great friends!